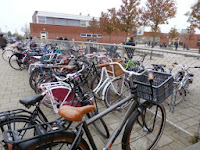 Join me at Primary School The New World (De Nieuwe Wereld) in Purmerend in The Netherlands for an inside observation of a Dutch school run. It is five minutes before the school is finishing, so there is a fair number of parents gathering on the school’s central square. What immediately catches the eye is the large numbers of parked bikes. In the bike racks inside the school grounds we see the children’s bikes and outside the school grounds we see the bikes of the parents who just arrived. 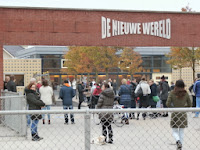 Compare this to your average school in the United Kingdom, where private driveways shout out in capital letters to staff and parents to travel by car. My parked bicycle on the driveway in this picture looks clearly out of place. Large parts of UK school grounds are often taken up by (chaotic) parking, making it truly unwelcoming to arrive by foot or bicycle. 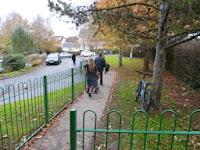 Often, large numbers of walking people have to squeeze themselves through narrow gates, while those arriving in a metal box on wheels have free range. The design of this type of school grounds only communicates one strong visual message; come by car! So called “school travel plans”, although well intended, are often a farce. 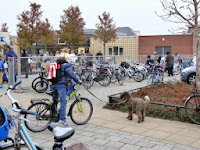 Back now to “The New World” school in The Netherlands, where children start coming out of the school building.We notice there is a great many of older youngsters leaving the school grounds on their bikes independently. These kids shrug the school’s day off their shoulders with a physically and mentally healthy bike ride and do that twice per day, five days a week. Most of these rides will only be 10-15 minutes max, but they are an important factor to keep the obesity figures of The Netherlands to the lowest of Europe and figures of mental happiness to one of the highest in the world!

What we are interested in now is what happens outside the school gates. Are the roads next to the Dutch school suddenly filling up with cars, such as in this typical picture of the UK on the right? Do we hear engine noises and slamming car doors taking over? Do we see parents parking illegally on yellow lines, making erratic moves with their cars? Do we see a crossing patrol person plastered in high-visibility yellow turning up trying to keep order in this car mayhem? 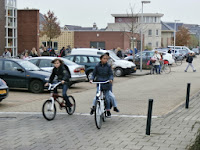 Eh, no, nothing of the sort. At "The New World” school in The Netherlands, the scene stay remarkably quiet, as you can see in the picture on the left. You can argue that some children leave the school grounds and join the road on their bikes in an erratic way, but their moves are no safety hazards in the same way as similar moves of people in cars; a metal box on four wheels can kill easily, a bicycle going 10 mph max never will! 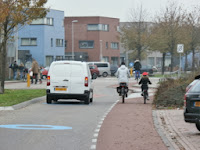 We move our attention to the through-road next to the Dutch school. We spotted perhaps two cars per minute passing ten minutes ago; well this number remains exactly the same during the “school rush”. The only thing what increases is the number of cyclists on the through road. They make their journeys here via on-road cycle lanes which are so wide, that it even fits a mum and a daughter cycling two abreast, allowing them to chat happily about their day whilst cycling. Even the white van overtaking in this picture on the right doesn’t bother them, as the permanent speed limit on this road section is limited to 30 km/h (20 mph). 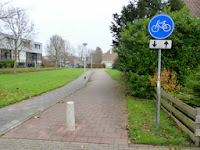 Mum and daughter might turn right in a minute, where a wide cycle path with separate space for walking and cycling will take them closer to home in great comfort and ease. This all shows why Dutch people make so many practical journeys by bike; it is often easier, faster and more comfortable than travelling by car. A gradual change of road and public space design since the 1970s has created this pleasant environment. For any country, it is never too late to start this gradual change too!

For example, on cycle paths in the UK, the removal of hazardous barriers and better maintenance of existing paths really don’t pull public budgets; it is just a matter of priority. 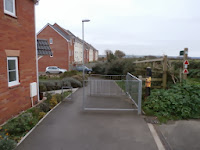 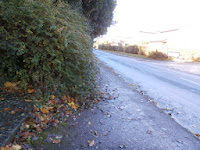 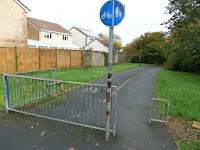 When building new paths, there is often space to make paths with separate areas for cycling and walking, so just do that and also stop erecting barriers which make it virtually impossible to actually cycle. A cycle path where you have to cycle walking speed because of pedestrians is not a cycle path. Such routes are not easy, fast or comfortable, so hardly anyone uses them, simple. 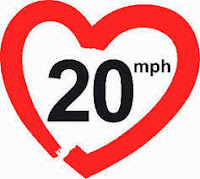 Another cheap start to make many UK-roads more cycling friendly is the introduction of 20 mph zones, especially around schools and regardless the so called “importance” of the road in question. The nationwide Twenty is plenty campaign is gathering speed with more and more areas being converted at a very low cost; as a matter of fact, just a couple of signs!
More than half of road deaths and serious injuries occur on roads with 30 mph limits, with Britain having the highest percentage of pedestrian road fatalities and one of the lowest levels of children walking or cycling to school in Europe. 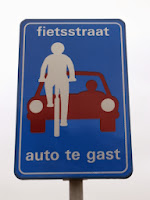 British parents consistently cite traffic speed as the main reason why their children are not allowed to cycle or walk to school. Lowering urban and residential speed limits to 20 mph has reduced casualties in Portsmouth’s 20 zones by 22%! The Dutch have realised all this a long time ago. Their latest invention in their 30 km/h (20 mph) campaign is the so called fietsstraat (cycling street), where the car is guest (see picture for road sign), rather than the other way around. 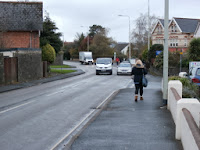 The next step for the UK would be the redesign of its roads over a longer period of time, simply when the road is due to be resurfaced. Local authorities should just stop painting those centre road lines on local roads, as these just encourage speeding and confirm the driver’s comfort that the road is built for just them, while it wasn’t. Painting no lines on local roads even saves money on paint! In the long run, there may even be budget for speed bumps in front of schools and the design of more welcoming school grounds. A quick gain would be the provision of covered bike stands at schools. Twelve parked bicycles easily fit on one car parking’s space; let's make a statement! 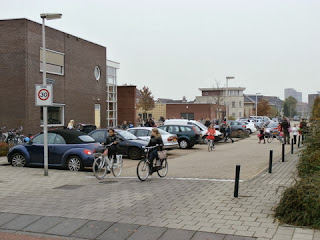 It is all no rocket science. Governing bodies all over the UK should start acting, rather than just talking about cycling. Health issues associated with obesity cost the UK already £ 5 billion per year. The provision of good cycle routes, providing parents, children and school staff with a choice in transport, is really much cheaper! I leave you with one more picture of the "school run" at “The New World” in The Netherlands. We need this type of world and school run to survive as healthy species; simple!


What about getting on your bicycle yourself with one of my "Cycling Dutchman" guidebooks?


Buy it now and also receive GPS-tracks of all routes!

Buy it now and also receive GPS-tracks of all routes!
Posted by The Cycling Dutchman at 09:04