The joys of riding a banana bike! 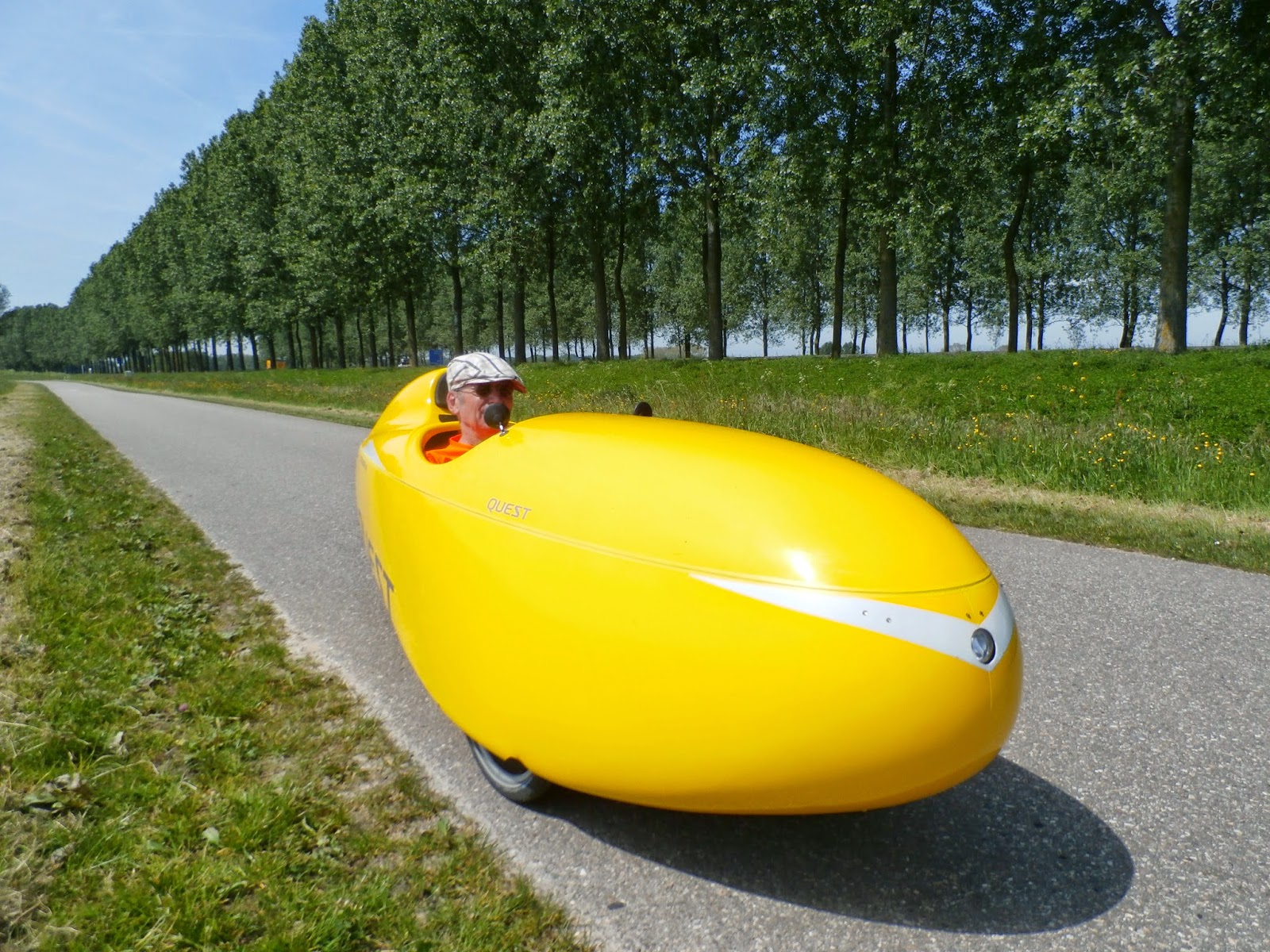 British people of a certain age will probably remember the revolutionary SinclairC5 electric bicycle (see picture on right). Invented by eccentric Clive Sinclair, this recumbent electric bike looked very much as a mini-car. The Sinclair C5 very quickly became the laughing stock of the country, as British people just didn’t want to ride the thing due to safety concerns.

Had Clive Sinclair brought his C5 to The Netherlands, it might well have worked. Back in the 1980s, the astonishing cycle network of The Netherlands was already very much established and Dutch people may well have gone for it, as they didn’t have to fear for riding among motorised traffic as the British C5-rider had to do. 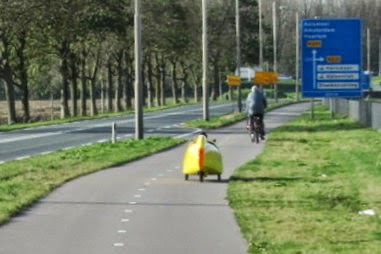 Today, we see regularly C5-inspired bikes on their way in The Netherlands. Some are also nicknamed banana bikes, due to their shape and colour. A cross over between recumbent bike and the C5 concepts, it is a distinguished feature on Dutch cycle paths. Wytze Bijleveld is a happy Dutch banana bike owner and in this month’s guest blog, he tells the story of his banana bike: 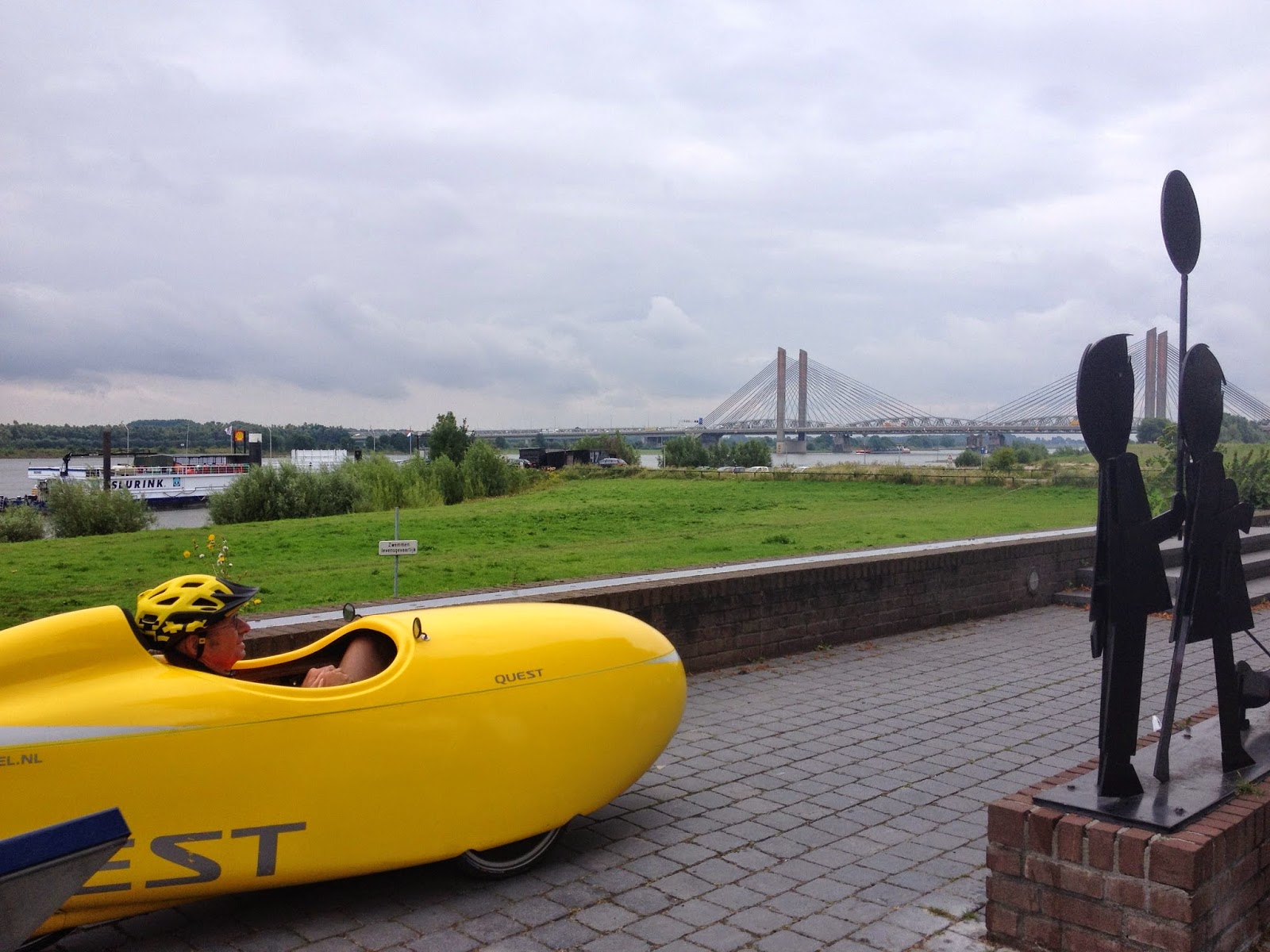 "The purchase of a banana bike was a logical progression for me. After riding a sitting bike, my first recumbent (Flevo Bike) and  a recumbent racer (Challenge Hurricane), I was simply ready to ride an enclosed recumbent bike. The ability to make longer journeys and the joy to be less affected by rain and wind were the main reasons to get a banana bike. I haven’t looked back since.

The official name for a banana bike is a Velomobiel (either the Quest or Mango model) or Sunrider, depending on the brand. Its riders form a small community in which people know each other very well. You are either part of the “open” recumbent rider’s community or the “enclosed” recumbent group (such as the banana). I don’t keep up with their events regularly, but I try to visit the annual Cycle Vision event, just to keep an eye out for the latest innovations. My main interest  though is the relaxation that cycling brings.

The banana can cater for daily commutes up to 40 kms (25 miles) one way. This distance would take you about an hour on the flat. Longer journeys are easily possible too, but could be tiresome on a daily basis. I have done family visits with rides up to 100 kms (65 miles) each way. Such a distance only takes me 2.5 hours. On a normal bike, it would have taken me five to six hours. 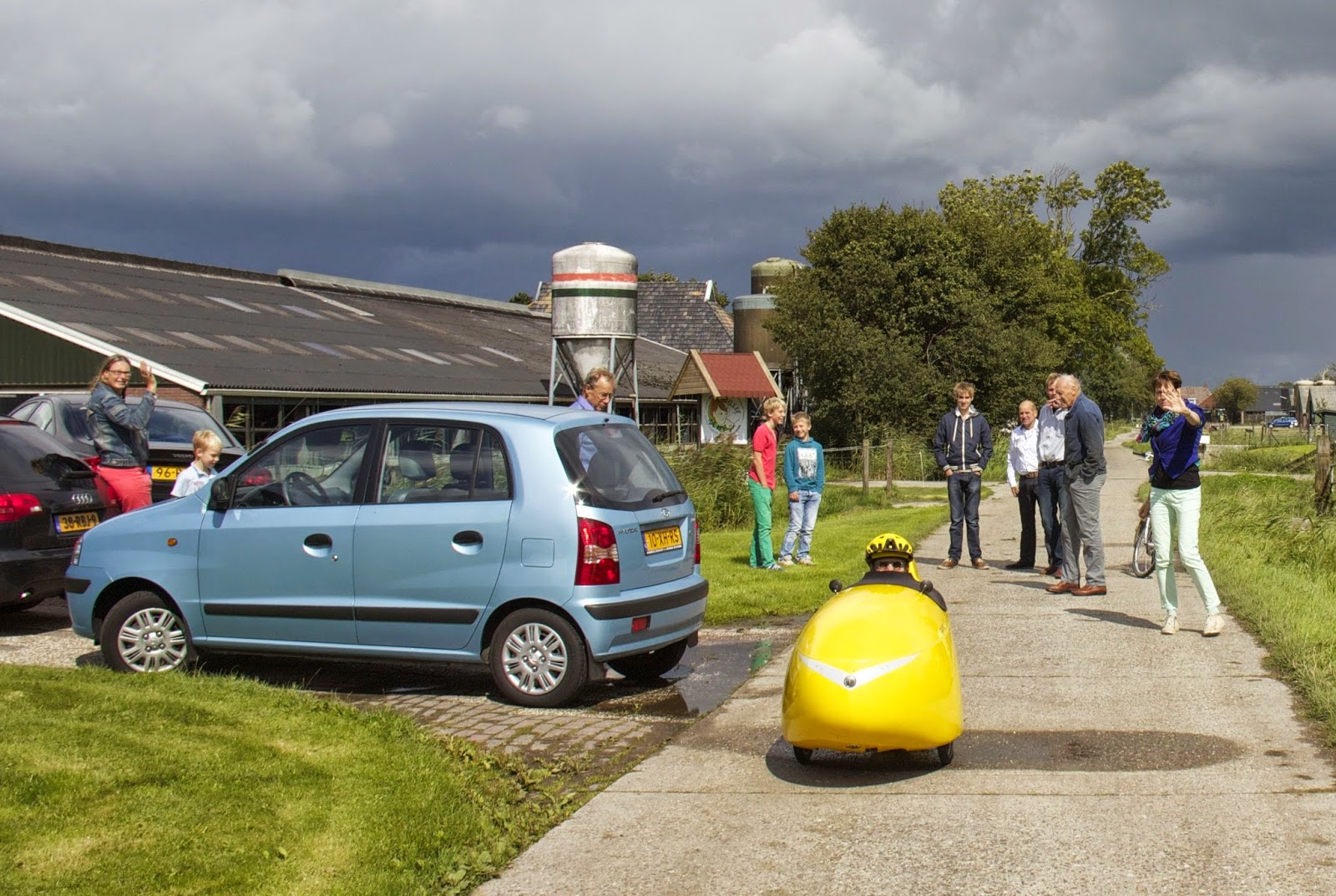 Spring 2014 I did a circular ride through The Netherlands, Germany and Belgium, mostly following the Rhine River routes. The banana bike proved to offer plenty of space to bring a tent and cooking utensils, especially if you pack everything in various smaller items, allowing you to use every inch of space on the inside. I quickly became a sight anywhere where I stopped. When pausing on Cologne’s Central Square, I found myself surrounded by a crowd admiring my banana. With so much interest from the locals, I decided to park it up safely for the night in a car parking garage. As the banana fitted under the car park barrier, I managed to park for free! 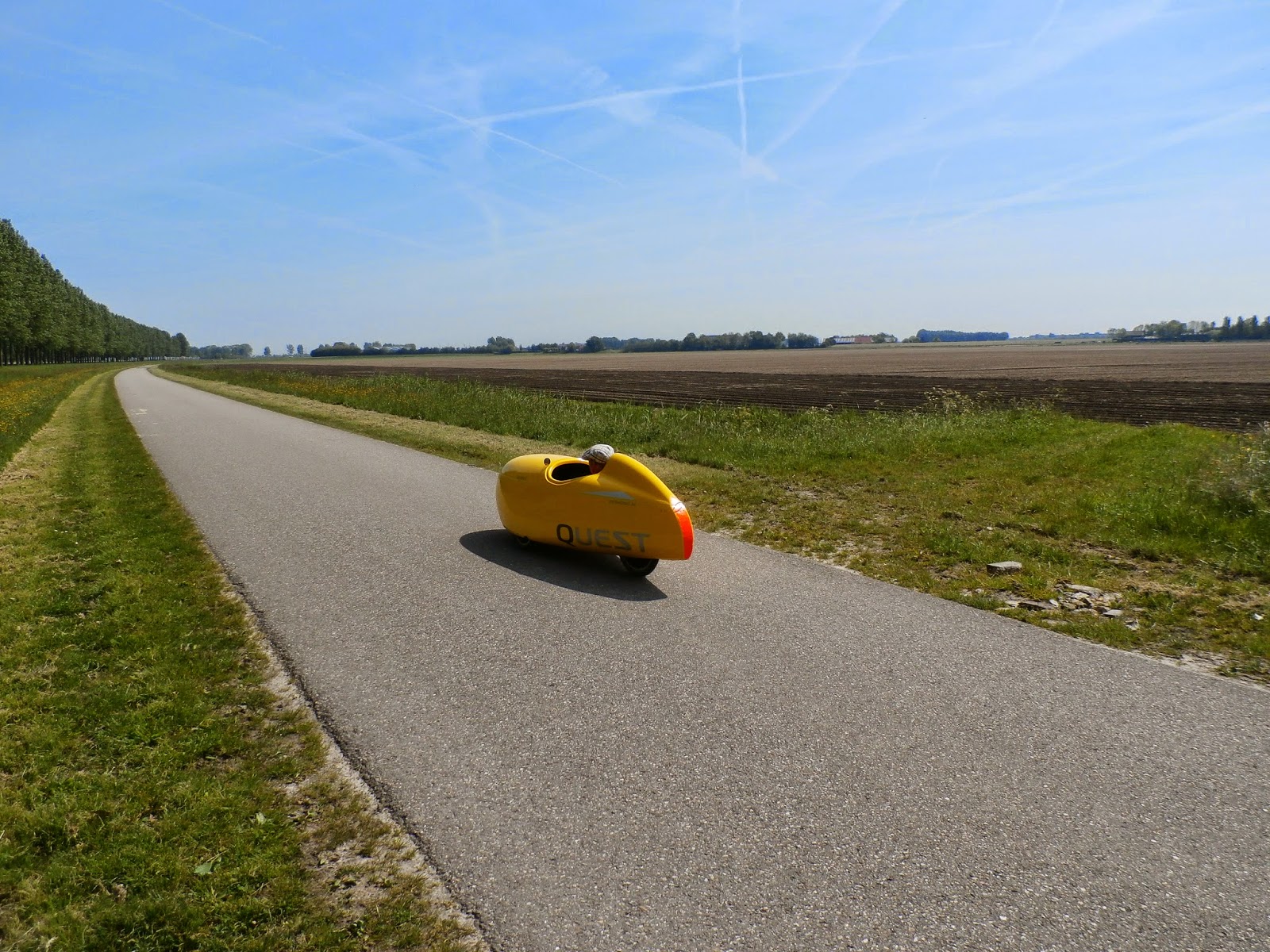 The banana is holding itself together on hills just as well. Obviously the speed drops, but that is mainly because of the weight (especially when riding with all the camping gear). It is easily possible to ride a very low gear without getting wobbly. I found the sensation similar to riding a normal bike up hill. Going downhill is a different story; you can go fast, very fast! I don’t let go the speed above 80 km/h (50 mph), but I know other banana riders who let it go to 100 km/h (65 mph). I think that is irresponsible. Personally, I keep a close watch on the performance of my brakes. I didn’t have any issues with them so far. 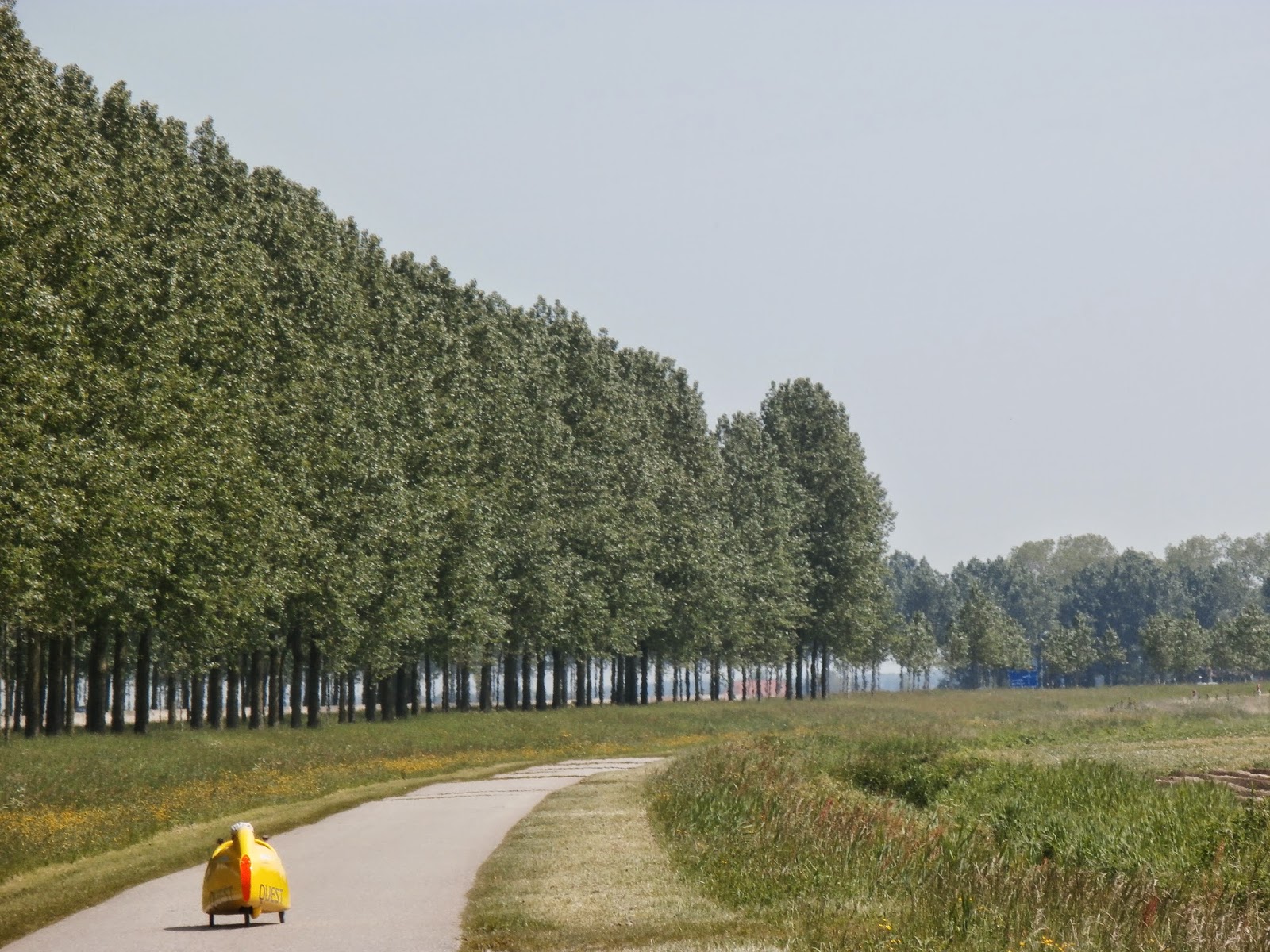 The banana bike remains a special sight on Dutch cycle paths and roads, although nearly everyone I speak has seen one around or says to know a banana rider. About 2000 banana bikes have been sold in The Netherlands so far. On a total bicycle population of 14 million, its market share is still very tiny!

So what is the general perception of the public in response to my appearance with the banana bike? Well, I have been called a “lazy git”, a “dodger”, an “idiot”, a “green freak” and obviously an irresponsible person making our roads extremely dangerous! Fortunately, my banana gives me also plenty of spontaneous encounters with interested and open-minded people, who secretly might want to own a banana too!

For next spring, I am looking at a longer international camping trip again, possibly north to Denmark or further south into Germany from Cologne, so look out for that banana bike!"

What about possibly encountering a banana bike yourself with a high quality "Cycling Dutchman" guidebook?

Buy it now and also receive GPS-tracks of all routes!
Posted by The Cycling Dutchman at 15:00