“I just didn’t know this was here!” - The relevance of signage

“I just didn’t know this was here!” 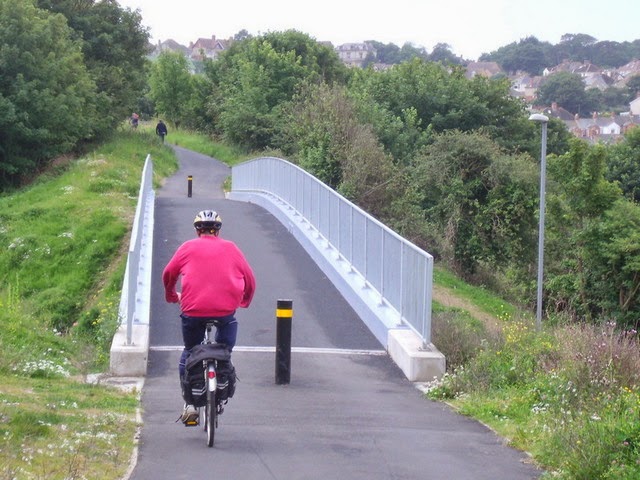 I hear this line regularly from locals while doing cycle route surveying work. Completely surprised about the presence of a cycle route, he/she then also often states he/she “lived here for twenty years”. It painfully shows how many British people hardly ever explore their own local area on foot or bike beyond the merits of the main through roads. Rushing off by car, many just don’t have a clue about other ways to get from A to B. 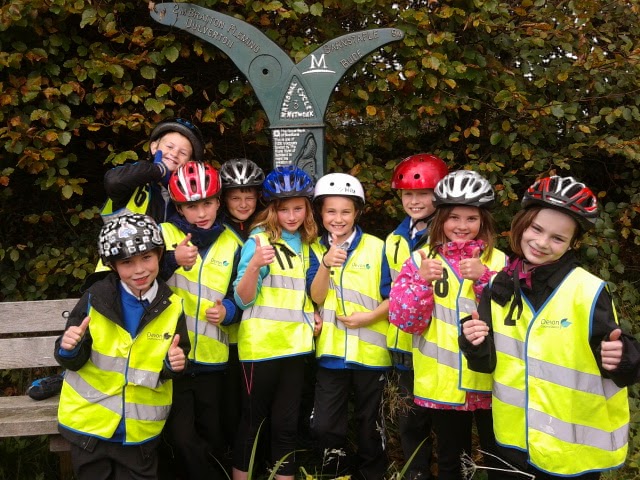 We also notice this when we teach Bikeability to school children. When taking them out and about on local routes near their school, we hear many boys and girls often declaring that “they have never been here before”. This is pretty sad, given the fact we are often cycling within a one mile radius from where most children live. 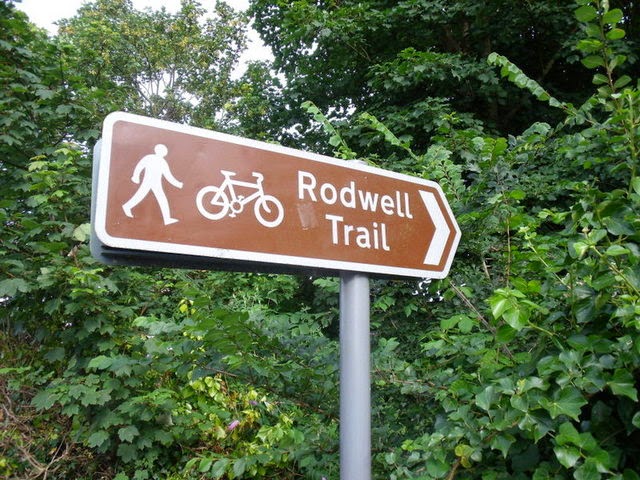 In my opinion, beyond all the problems and limitations of UK cycle routes, the lack of proper signage is an issue which needs great attention. To get a country back on bikes, you need to show clearly in the field, in the public eye, where cycle routes are and where they will take you. Only this will truly encourage people to explore beyond what they know. Free cycle maps, on-line routeplanners and just that occasional sign as pictured here are all well intended, but generally only serve those who are already on the look out. 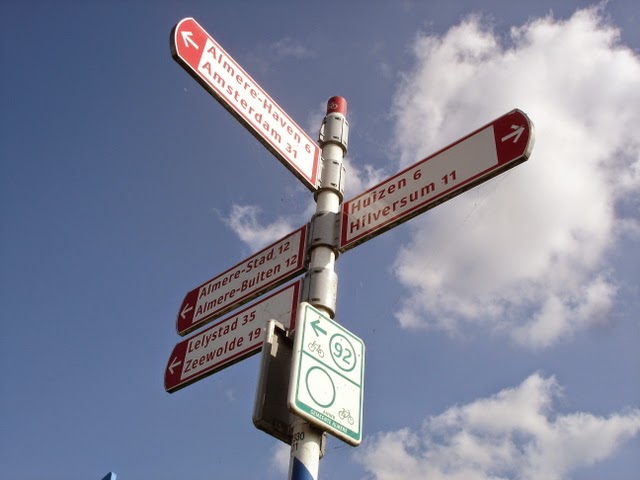 In The Netherlands, the authorities only know this too well. To keep the masses on the move by bike, grant visual signage, dedicated to cycling only, is available at every relevant junction. You’ll be clearly directed to common destinations. It is such signage which made me explore locally myself when I was just an eight year old boy; it definitely stopped me of becoming obese at young age!

Just by seeing people using these well signposted routes, other people get inspired to do some local exploration too. This is visible in the UK to some extend in places where new cycle routes are created, but increase in participation in walking and cycling could be so much higher if signage as a tool was taken really seriously. 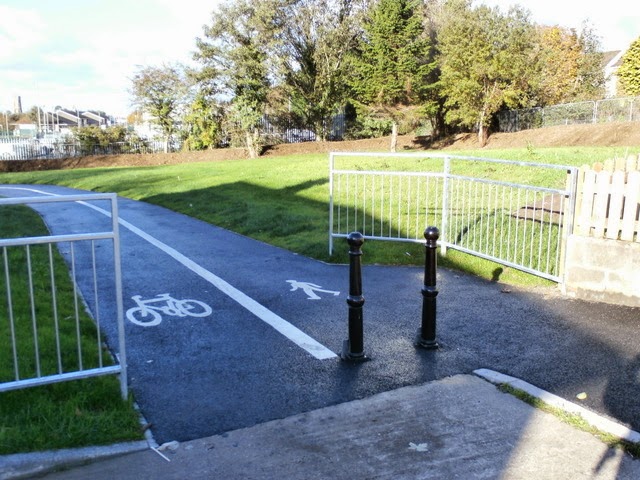 It still surprises me how councils spend millions on the creation of a new cycle route, but then fail to signpost it properly. In the scheme of things, good signposting is very cheap. With many UK cycle routes not being obvious and hidden away from the main road network, these routes need a towering visual presence on the streets to get known by its potential customers. 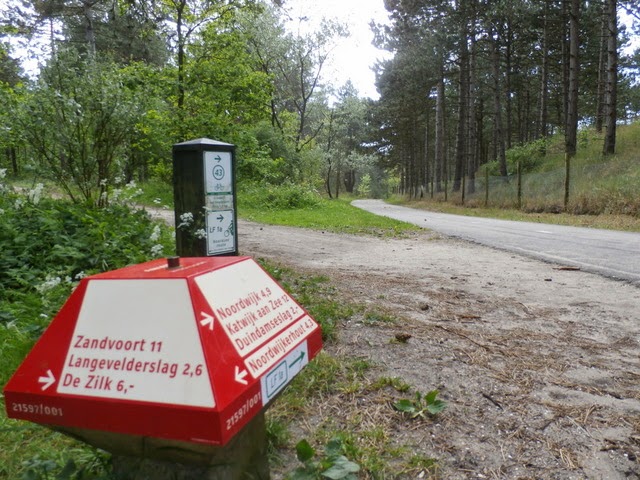 Clear destination signage dedicated to cyclists has been present for a long time in The Netherlands. It all started way back with the so called “mushroom signs”. These signs have indeed the shape of a mushroom. Placed at low-level and with reasonably small print, they provide a wealth of information to the cyclist, with distances to destinations even highlighted in 100m intervals. You can still see these “mushrooms” forming impressive networks in holiday areas where leisure cycling is very popular, such as on the Dutch coast and on the moors in the east of the country.

For day-to-day journeys, white signs with red lettering clearly show the most direct way from A to B. These are really the cycling equivalent of the green destination signage on UK main roads. As a driver you are completely accustomed to a system in which once the name of a town appears on a sign, you’ll be fully directed to the town in question. In that respect, Dutch cyclists receive the same treatment as drivers, and with towering results. At least one in four journeys in The Netherlands is made by bicycle, while in the UK, the poor “one in fifty journeys” figure still prevails. Lack of continuous quality destination signage on existing cycle routes is in my view part of the problem.

Clear and consistent signage is an essential part of the Dutch cycling success story. A good example of the efforts by local authorities is the development of the Rotterdam Regional Cycle Network. Back in the 1990s, Wim van de Poll of UrbanDynamicLabs developed the concept of numbered cycle routes for commuters, in an attempt to bring more clarity in the spaghetti web of existing cycle routes.

Van de Poll came up with a clear network for Rotterdam cycling commuters, building bridges across borders of various local boroughs. Work on implementation of the network started in 1995 and was completed by 2010. All commuter routes of this network are clearly branded. Beyond the obvious route numbers, Van de Poll also insisted that every route should have clear destinations in all communications, making it always obvious to any user what the route is about. 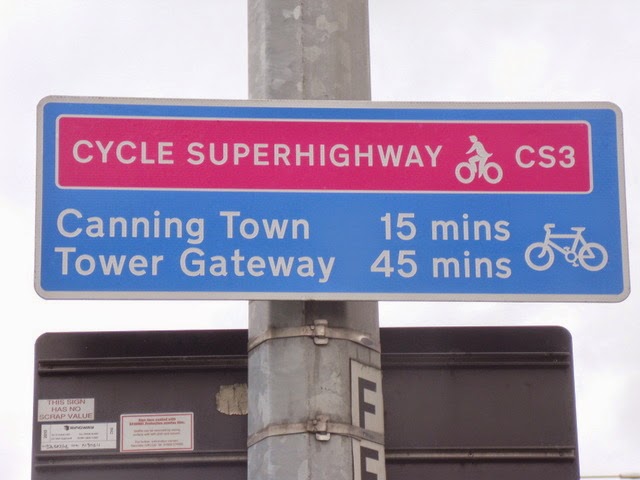 You might think that the London “Cycling Super Highways” are signposted in a similar way, but if you have a closer look, there is really not very much about it beyond the obvious blue sway of paint on the tarmac. I don’t intend to discuss the general poor quality of the “Cycling Super Highways” at this point, but it is obvious that its signage doesn’t meet “Dutch standards” either.  Signposts are still isolated features and are not present at every relevant junction.  Also, signposted secondary routes to destinations nearby are often limited to a "one sign only". Once you have left the "super highway" you are pretty much on your own. Compare this with the map of the Rotterdam network, where all secondary routes are fully signposted as well! 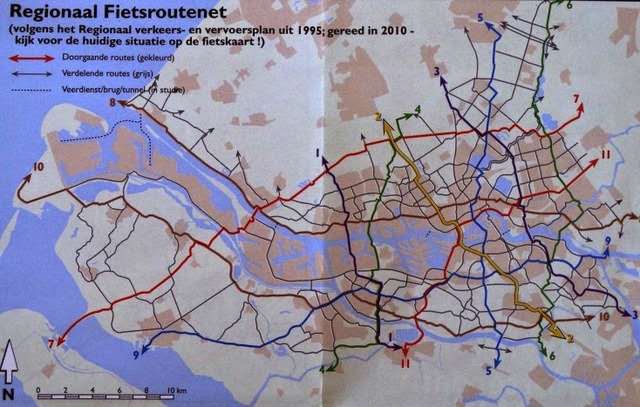 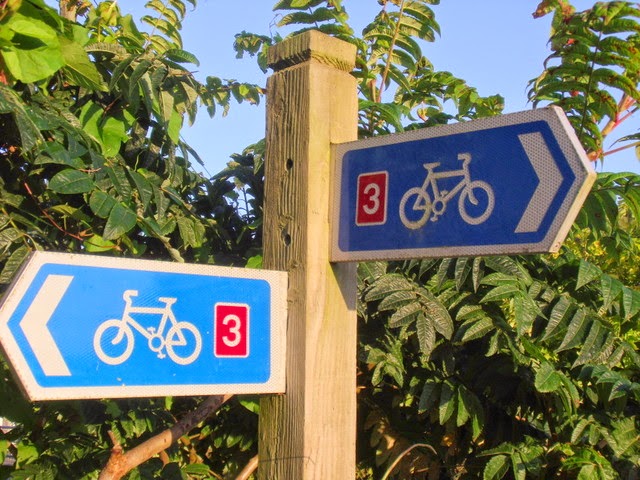 In some aspects, the London "Super Highway" signage is already better then the average signage of the National Cycle Network. The London posts give at least an idea about destinations and travel times. This is often lacking in the National Cycle Network-signage (see picture left). I truly have the impression that the majority of the population still doesn't have a clue what is hiding behind those little blue signs with red route numbers...

The New Forest National Park has been working beyond the NCN-network and has created another number-based system. It is a network of numbered junctions, which are all clearly marked at these particular junctions. The signs have a bar code on the top of its wooden poles and by scanning the code with your phone, you’ll get a map on your screen, so you can work out where you want to head next… 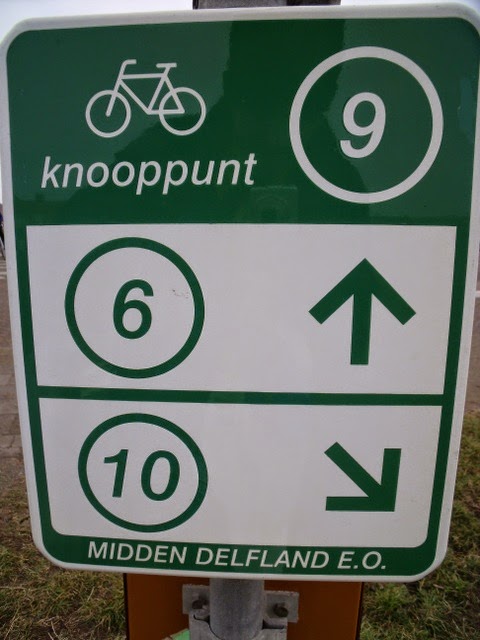 This looks suspiciously the same as the Dutch “junction” network, on which junctions ("knooppunt") are also numbered and signposted as such. This network covers the whole country and is designed for exploring by visitors and locals alike, away from the Dutch "cycle path next to main road"-network and its direct routes. In the picture here, you are at junction 9 and you can immediately see how to get to junctions 6 and 10. Also important, an overview map can be found at every numbered junction, see the sign of junction 48 below. This is much more inviting to use and more visible for potential customers in comparison to the very minimal New Forest example with its dependence on high-tech smart phone technology. 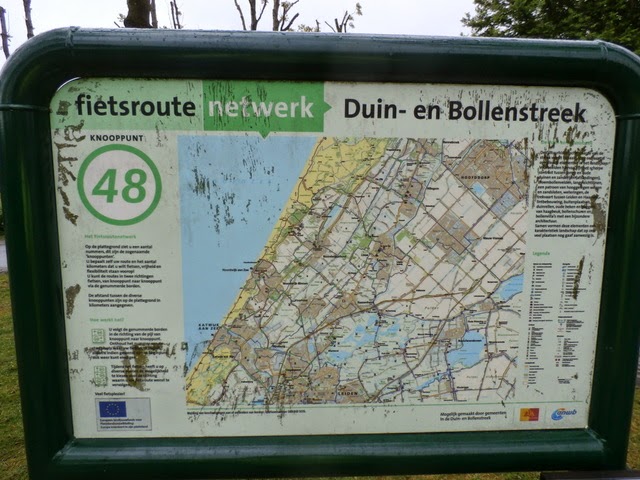 Although hugely popular in The Netherlands, a junction network has its limitations. Van de Poll, the designer of the Rotterdam commuter network, has been out on his bike a lot and can tell you entertaining stories of lost cyclists, desperately asking him the way to, for example, “junction 48”. “Where do you want to go then?” Van de Poll normally asks in return, just to be replied with added frustration “to junction 48”. This shows how a system also can take over and how the link with the real world easily can get lost. 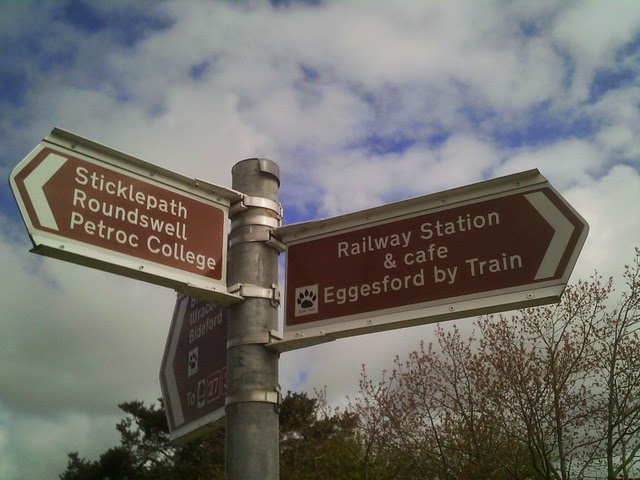 In my opinion, there is a lot to be gained with continuous destination signage, making all those back streets routes (which so happily exist on cycle maps and on route planners, but nowhere else) visible. For me, signs with new, alternative designs breathe something fresh and new. An example is shown here. The small letter font gets pretty close to the style of the Dutch mushroom-signs, meaning it is possible to show multiple destinations on one sign. The reasonably small size of the sign also doesn't take over its surroundings and still has a great clarity. 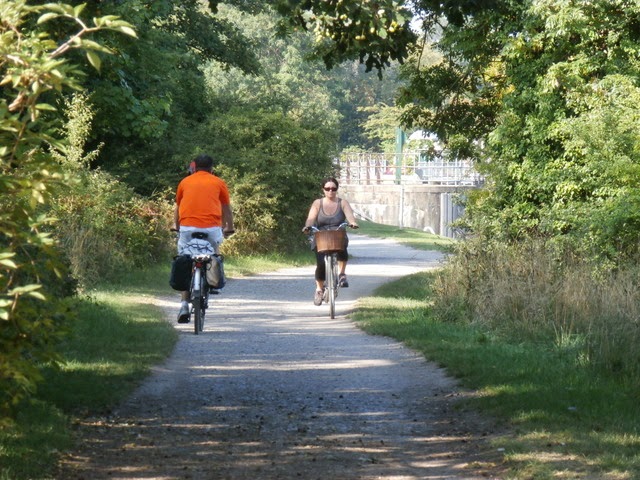 A visual presence of cycle route signage system, which is continuous and consistent in its presence and quality, will truly inspires people to explore. It will allow millions of new route users to say virtually at the same time “I just didn’t know this was here!”

You don't need proper signage if you use a high quality "Cycling Dutchman" guidebook:

Buy it now and also receive GPS-tracks of all routes!
Posted by The Cycling Dutchman at 07:31