Amsterdam: "In The City of Bikes" 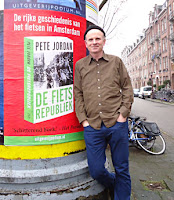 2002. Pete Jordan from San Francisco travels to Amsterdam to study its cycling culture. His aim is to return to the USA to make America’s cities more bicycle-friendly, but Pete falls in love with The City of Bikes and convinces his bride to live together in Amsterdam. Pete Jordan spontaneously starts to study the history of cycling in Amsterdam. His study has now resulted in a fantastic book which we review here today. Jordan's book is naturally named In the City of Bikes.

In the first place, In the City of Bikes (also available in Dutch as De Fietsrepubliek) is Pete’s personal story, hilariously describing the culture shock he experiences after his arrival in The Netherlands. The book naturally starts on how Pete on his first day in Amsterdam immediately gets shouted at by an attractive looking girl on a bike. He is walking on a cycle path, as many international visitors to Amsterdam do. It doesn’t stop there. Pete gives a full inside to everything what is happening to him; he writes about the theft of the bike he buys for his wife (and his attempts to buy it back on the black market), the unique experience of cycling in a cycling traffic jam after a night out in the pub and how he gets into an argument with the police whilst he is convinced he has priority (finally finding out he has been misinterpreting Dutch traffic rules for years). 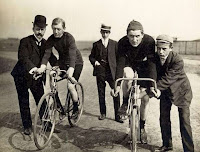 These personal stories make the book an entertaining read, but it is Pete Jordan’s study into the history of cycling in Amsterdam which makes this book truly special. It is the first full study on this topic ever published and features some amazing facts, all based on historic accounts from newspapers, council documents and personal stories from many people, even including Anne Frank (yes, she wrote about cycling in her famous diary!). Finally, we are able to picture the full history of cycling in Amsterdam, thanks to Pete Jordan’s ground-breaking research.

The study takes the reader on a journey in time, starting in the 1890s when bicycles where a novice, only affordable for the wealthy. There is the compelling story of how the Dutch heir to the throne Wilhelmina was forbidden to learn how to ride a bike by the government, as cycling was regarded to be dangerous (putting the continuity of the Dutch Royal family at stake!). She nevertheless taught herself once she became Queen at the age of 18 and was regularly sighted happily cycling in the streets of The Hague, up to old age (see picture).

Jordan also finds how it was actually WWI (in which The Netherlands managed to stay neutral) which brought cycling to the masses. From 1918, the Dutch could cheaply import bikes from broke neighbour Germany, causing the transformation of Amsterdam into the City of Bikes as we still know it today. Jordan then shows an interesting parallel between The Netherlands and the USA in the 1920s. 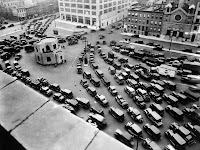 Whilst in The Netherlands the bicycle finally became cheaply available for the masses, the same happened with cars in America. By the time the cycling era in The Netherlands had truly started, it already had come to an end in the USA.  The historic personal accounts of nationals from both countries (whilst visiting each other’s countries) are a joy to read and provide a great inside into how people saw things in the 1920s and 1930s. 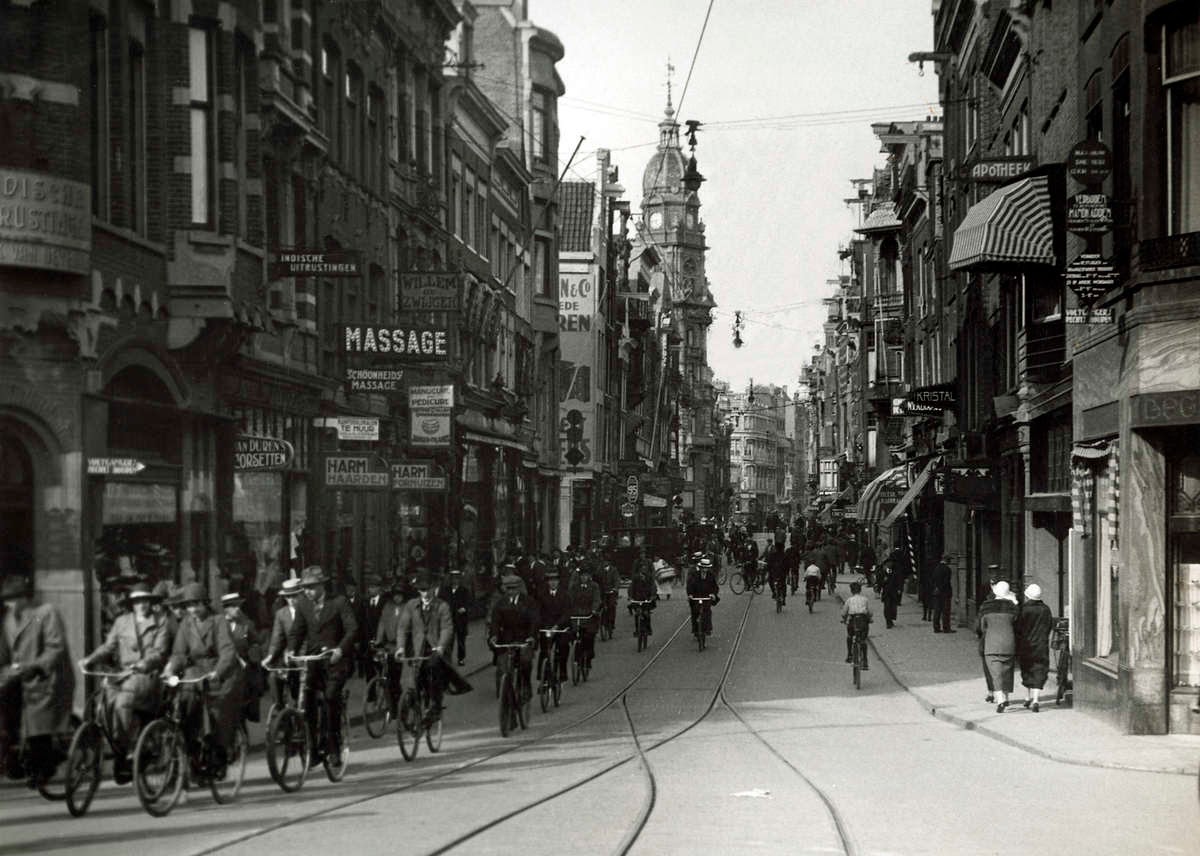 Probably because of the large numbers of people cycling, Amsterdam's City Council was by no means cycle-friendly in the 1920s. The Mayor even decided to ban cycling in one of its shopping streets, while drivers were allowed to keep driving through this narrow "Leidse Straat" (see picture).

What about this "letter to the editor", reflecting on this issue, in the Telegraaf daily of 13 November 1927:

"Despite all our democratic airs, a delusion is now developing in the heads of our authorities and ourselves; the idea that ten cyclists are less important than a single motorist. Therefore, cyclists of Amsterdam, unite. If we don't, soon - as pariahs of the roadway - we'll simply be consigned to the streets that are lifeless and poorly-paved."

Sadly, the writer of this letter couldn't imagine how accurate this look into the future would be. 85 years on, in many countries cyclists indeed feel as the pariahs of the road. He/she would be proud though to learn that his/her words are not forgotten and, thanks to Pete Jordan's research, can inspire cycling campaigners today. 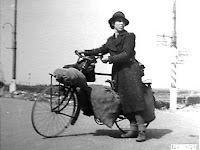 From the 1920s and 1930s, Jordan’s historic account continues into WWII and shows how the Nazi regime (beyond many other things) also brutally affected the Amsterdam cycling way of life. Jordan found that of the four million bicycles in The Netherlands before the start of WWII about two million bicycles were either confiscated by the Germans or "ridden to death” by the Dutch themselves. Especially the Hunger Winter (1944-1945) was the end to many Dutch bicycles. Hungry city folks were forced to head for the countryside in search for food, cycling incredible distances in harsh conditions.

As supplies of rubber had run out for years, many tyres and inner tubes were worn out, making many Dutch people ride their bikes on the bare wheel rims, gradually decaying their bikes forever.  As Jordan writes, it took years before the number of bikes in The Netherlands was back on the levels of from before WWII, with most bicycles this time being home-manufactured. Iconic Dutch brands as Gazelle and Batavus still exist today. 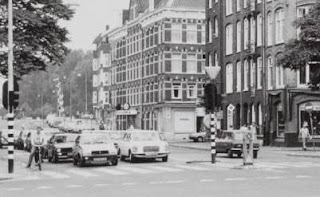 With all its economic wealth, the 1950s and 1960s than finally brought the take over by motorised traffic, just as happened in England around that time. Roads were built with only motorised traffic in mind and cyclists and pedestrians were pushed into the margins. The Netherlands counted 3300 road deaths in 1971, with over 400 of these deaths among children under the age of 14. As also shown in the video How the Dutch got their cyclepaths, the “child murder” finally sparked the Dutch “modern day” Cycling Revolution of the 1970s. 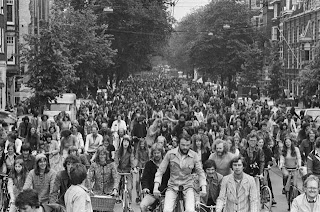 Pete Jordan’s book tells the tale on how, helped by the climate created by the Flower Power and Hippie movements, a handful of passionate campaigners managed to organise various large cycling demonstrations in Amsterdam.

Various public declarations by campaigning groups are quoted in the book, like this very first one, dating from 27 July 1965: 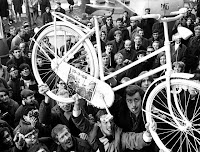 “Amsterdammers! The asphalt terror of the motorised bourgeoisie has lasted long enough. Every day, human sacrifice is made to the Auto-Authority. The smothering carbon monoxide is their incense; their likeness poisons the streets. Provo's White Bicycles Plan presents liberation from the car monster. The White Bicycle symbolises simplicity and cleanliness in contrast to the gaudiness and filthiness of the authoritarian automobile ”.

The legacy of the Amsterdam 1960s and 1970s cycling campaigns still echoes in mission statements of organisations like the Cycling Embassy of Great Britain and the Times Cities Fit for Cycling Campaign today. 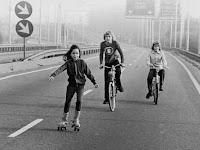 The oil crisis of the 1970s caused the need for the famous Dutch car-free Sundays (see picture) and was another push  to change road layouts in favour of cycling for good, as it reminded many people how pleasant cities were before the take-over by motorised transport. In the 1980s, Amsterdam City Council and many other Dutch authorities gradually reviewed their transport policies in favour of sustainable traffic, including some revolutionary concepts as the famous Dutch roundabouts.

Pete Jordan makes this unique tale a fascinating read, especially as there are so many parallels with present-day campaigns for proper cycling infrastructure in other countries. In summary, In the City of Bikes is a fantastic read, rich in detailed facts, personal stories and entertaining all the way through.

Pete Jordan’s ground-breaking book has something to offer for everyone who loves cycling, even if it was only for that one simple message: “Wherever you are in the world on your bike, please know you are not alone. There may well be a cycling traffic jam in the middle of the night in Amsterdam right now.” Just that feels good, doesn't it?
Copyright notice: many historic pictures illustrating this article are sourced on the internet and seem to be copyright-free. If this is not the case and you have the rights to a picture, please contact us and we’ll remove the picture from the website.

What about getting on your bicycle yourself with one of my "Cycling Dutchman" guidebooks?

Buy it now and also receive GPS-tracks of all routes!
Posted by The Cycling Dutchman at 12:57