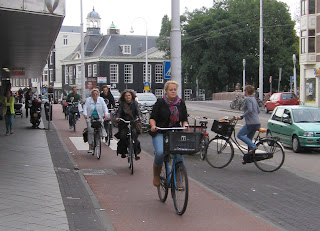 OK, here is the thing. Amsterdam is famous for its bicycles and cycling culture, but if you are visiting from overseas and decide to join in with all that cycling fun, you might not find it fun at all. You’ll indeed find out that Amsterdam is ruled by cyclists, much more so than you’d like. Cycling in Amsterdam’s historic city centre can be extremely hectic, with local cyclists fighting for every inch of space, not to mention buses, taxis and trams. As a browsing, wobbly cycling tourist who is trying to figure out how it all works, you may well have to deal with Amsterdam cyclists who overtake you very close and fast, cut you off at corners or harass you by relentless ringing of their bells. If you completely “mess it up” in their eyes, you may get shouted at too! 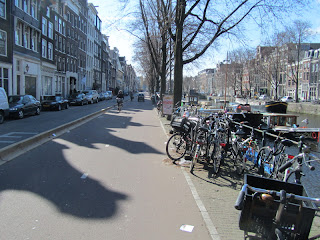 To be happy on your bike as a cycling tourist in Amsterdam, you should avoid the main through fares in the city with its cramped and narrow cycling infrastructure, used by large numbers of rushing locals. My Cycling in Amsterdam and The Netherlands guidebook provides six great Amsterdam circular routes. In this article, we show you one of the routes (route A), taking you from the Central Station into the greenbelts of the city. This 20-28 km route will take you to places in the historic Amsterdam canal belt where cycling is actually at its best, with lots of Amsterdam landmarks to be seen on the way. It will also give you a more correct image of what cycling is like in The Netherlands as a whole. 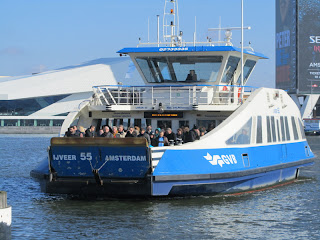 Join us on this circular route at the main ferry landing behind Amsterdam Central station. If you were still in doubt about the unpleasantness of Amsterdam’s inner city cycling, it says it all here. Total mayhem when a ferry arrives. Cyclists, mopeds and pedestrians all rush off in all directions, pushing through, honking and ringing bells. As a visitor you should just observe this spectacle, it is definitely unique for Western Europe. 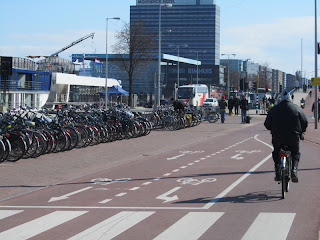 Whatever you make of it; isn’t it great they are all on bikes or by foot, rather than in cars? The mayhem will only last a couple of minutes or so and then, the cycle path alongside the IJ-Harbour is yours! 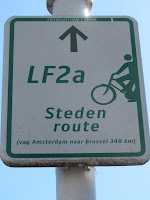 To start, we follow the signposts of the Amsterdam-Brussels long-distance cycling route, taking us away from the harbour and station onto a cycle path alongside a scenic canal to Nieuwmarkt Square. In medieval days, this used to be the city’s boundary. You’ll be greeted here by an impressive city gate, now housing a stylish cafe. It is one of the few remains of Amsterdam’s medieval fortifications which were not affected by an ambitious 17th century extension project, which would create the majority of all those famous canals Amsterdam is now famous for. 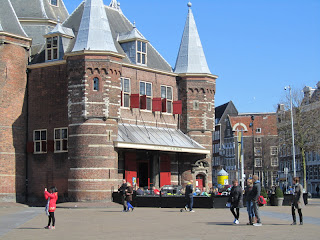 Nieuwmarkt Square is also the place where American Brian from San Francisco made a spontaneous analysis of Amsterdam cyclists. The way how he catalogued them in various groups of sub-cultures makes a great read, don’t miss this very funny website! 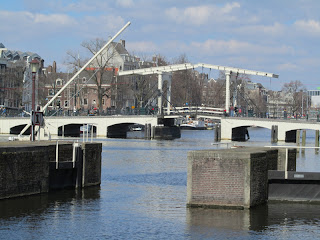 The route continues further south and hits the banks of the Amstel River, which gave Amsterdam its name. The traffic calmed road on the east side of the river provides a splendid cycle route away from the historic canal belt with some famous Amsterdam landmarks to take in on the way. The Magere Brug, in English known as the skinny bridge (which is a straight translation of the Dutch name) has been a river crossing point for centuries. It is a must for most Amsterdam canal boat tour companies to sail at least once under this bridge on every tour. 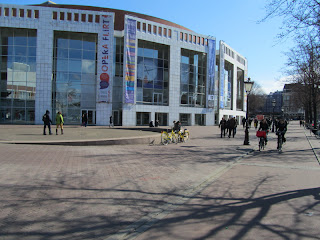 You’ll also cycle by the Stopera concert hall, the Amsterdam Hermitage Museum, Royal Carré theatre and the luxurious and most expensive hotel in town, the Amstel Hotel. 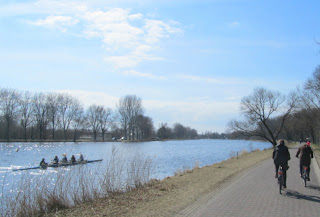 Further south, the route via the banks of the Amstel River takes you under the Amsterdam orbital motorway, from where the horizons widens. A peaceful Dutch river scene including angling, canoeing and cycling awaits you from here. 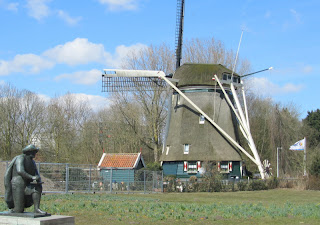 A Rembrandt statue depicts the Old Dutch master catching the scenery in one of his paintings. Right next to this statue, you’ll find an authentic Dutch windmill, the closest in the vicinity of Amsterdam’s city centre. 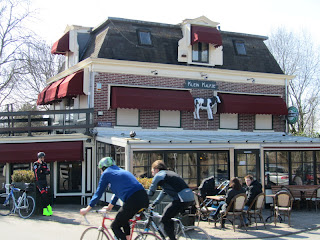 Just down the road, you’ll find the Kleine Kalfje cafe the obvious spot for a break. It is on a crossroads for popular local leisure cycling routes and cyclists make up the majority of the customers. 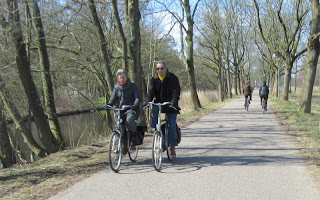 From here, we continue west by the Kalfjeslaan. This traffic free rural lane also sets the border line between Amsterdam City and its independent southern suburbs. The lane is lined with trees and popular for Sunday walks or bike rides. It brings us into the Amsterdams Forest, a large park, comparable in size with London’s Richmond Park. The Amsterdam Forest was created in the 1930s as a labour regeneration project and it is now one of the few full grown forests in the world below sea level. 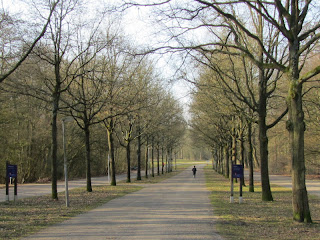 The Amsterdam Forest is the most obvious local leisure destination for Amsterdam city dwellers. On nice sunny days, you’ll find many Amsterdam people heading out by bicycle to the park, either for just a ride or a picnic. Weekend mornings are especially popular for running. 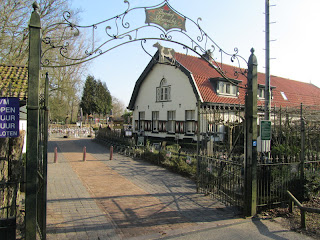 Further entertainment is provided by an educational centre (Bosmuseum), a city farm (Geitenboerderij), a Dutch pancake restaurant in traditional rural setting (Boerderij Meerzicht) and an open air children’s pool (at “Grote Speel Weide”). The Amsterdam Forest also feature a large hockey sports complex and a 2 km-long rowing canal (Bosbaan), which has been widened in recent years to be able to host international rowing tournaments. 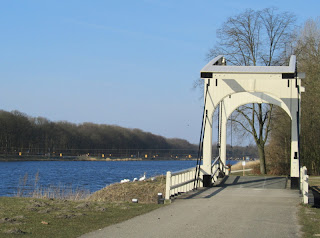 The vast size of the park makes you can still feel very much on your own, despite all the high profile attractions. The park, with paths either designated for walking, cycling or horse-riding (Dutch micro infrastructure at its best!), is a must for any visitor to Amsterdam who is into cycling. Having cycled in many places over the world, I still find the Amsterdam Forest unique. As “The Cycling Dutchman” I feel proud and very lucky to have grown up in this special place. 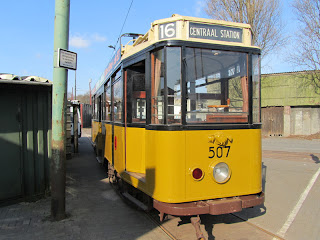 Heading back from this park to Amsterdam’s City Centre, the route follows a cycle path parallel to a heritage tram line, with electric trams from 1920s and 1930s era operating during weekends. The route takes you through the actual tram railway yard, with plenty of opportunities to see some of this old rolling stock, being collected from places as far as Vienna. 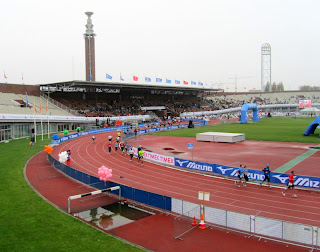 Don’t miss the Amsterdam Olympic Stadium parallel to path. It was used for the 1928 Olympics and was saved from demolition in the 1990s by a public appeal. The derelict stadium was fully restored to its former glory, allowing you now to cycle around the stadium. The stadium's cafe recalls the days when Ajax Amsterdam and the Dutch national football team used the stadium for their international matches. 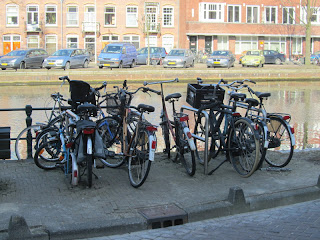 Beyond the stadium, you’ll briefly cycle through an early 20th century residential area. These old high apartment blocks with their very steep stairs have bike parking racks every 50 metres or so, typical for the living situation for many Amsterdam citizens. Deprived from gardens, it makes you understand why public green open spaces are so important for many people here. The Vondelpark is the next one to take in. 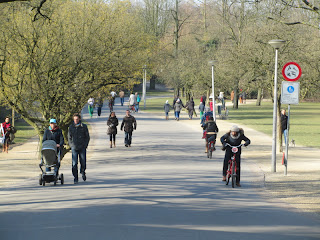 Being closer to the City Centre than the Amsterdam Forest, the Vondelpark has a completely different feel. This is an inner-city park and its wide traffic-free avenues, shared among pedestrians, runners, skaters and cyclists can get very crowded. The park was built in the late 19th century and part-funded by the Dutch AA, very much a cyclist’s organisation at the time. 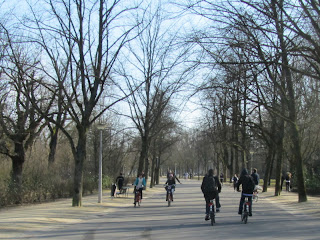 It took over 20 years of conflicts between pedestrians and cyclists and on-going public debate before the right to cycle in the park was definitely assured. These days "the rules" are as follows; slower traffic (pedestrians) keep right to the sides of the avenues, whilst faster traffic (skaters and pedestrians) use the middle area, overtaking slower traffic on the left; see how you go! 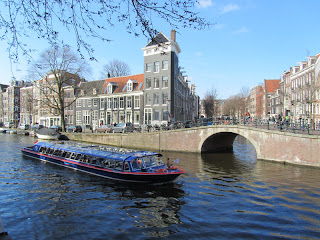 Via Leidse Plein Square and the Leidse Straat shopping street with its single tram track (no cycling!) the route reaches its final stretch back to Central Station. The Prinsengracht Canal provides great Amsterdam scenery and traffic-calmed cycling, although you must keep an eye on traffic coming from the side bridges on the way. Most of the 17th century Amsterdam Canal system is now declared World Heritage site and the views bridge towards the Westerkerk Church are indeed majestic. 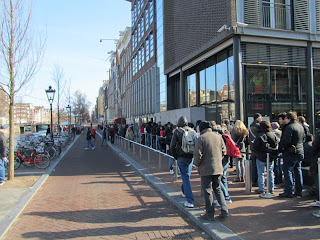 Just beyond Westerkerk, you’ll cycle past the Anne Frank House Museum. It is one of those few places in the world where people can still experience the true terror of the WWII holocaust. Queues are inevitable, as every visitor gets the opportunity to walk through the small room where Anne Frank wrote her famous diary whilst hiding for the Nazis. If you decide to visit whilst being on your ride, bring a strong bike lock, as there is no guarded bike parking available at this location. 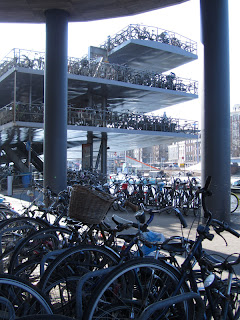 Talking bike parking, the ride then finishes back at Amsterdam Central station at what is now thoroughly an Amsterdam landmark too. The Fietsflat is a multi-storey bike parking facility, unique in the world and a worthy finish to your ultimate Amsterdam bike ride.

Note the circular route as described in this article is not signposted. If you like to cycle this route, it is highly recommended you purchase my guidebook Cycling in  Amsterdam and The Netherlands - The very best routes in the cyclist's paradise. The book features 1064 kms of routes and has special chapters explaining the unique Dutch cycling-minded traffic rules and its cycle route signage systems; 164 pages, colour, wiro bound, fits in standard handlebar bag. Buy it now and also receive GPS-tracks of all routes!


More cycling with the Cycling Dutchman:


Buy it now and also receive GPS-tracks of all routes!

Buy it now and also receive GPS-tracks of all routes!
Posted by The Cycling Dutchman at 22:34